Background: Worm infestation is a major problem in children from developing countries due to bad hygienic conditions. It produces nutritional deficiencies and anaemia in children, especially when hookworm infestation is present. Methods: This cross-sectional study deals with investigation of the frequency of intestinal parasitic infestation in children between the ages 5–12 years. A total of 283 subjects were tested and screened for different intestinal parasites at of Department of Physiology, Ayub Medical College, Abbottabad. Negative cases were re-examined and if found free of intestinal pathogenic parasites were labelled as negative. Results: Of the 283 children examined, 230 tested positive for various intestinal parasites. The frequency of helminthic infestation was found to be above 81%. There were 8 different species of helminths and protozoa found in the specimens. By far the highest frequency of 48% was noted for Ascaris lumbricoides while 6.9% (16 cases) of the specimens examined had mixed infestation. The mean Haemoglobin (Hb) level was found to be 9.82 g/dl in males and 9.0 g/dl in females. Virtually no Hookworm infestation was found which may be the reason of not so low Hb level of the subjects. Conclusions: A very high percentage (81%) of children from suburbs of Abbottabad have intestinal worm infestation and majority of them (48% of positive cases) have Ascaris lumbricoides. Children were not very severely anaemic because of virtually no hook worm cases.Key Words: Anaemia, Ascaris lubricoides, Helminths, Intestinal disease parasitic, Child nutritional disorders, Hookworm infestations.

After careful screening, we observed that the frequency of intestinal parasites is very high in our region. This study, small though it is, reaffirms the findings of similar other surveys carried out earlier confirming the very high rate of helminthic infestations in our population as a whole and in children in particular. By far the commonest parasite was Ascaris lumbricoides (48%) with 6.9% suffering from mixed parasitic infestations including H. nana, T. trichura and T. saginata. A surprise omission was failure to find any positive cases for hookworm infection and this may be the reason why these children with such a high frequency of worm infestation had a fair average haemoglobin of 9.82 g/dl–which is anaemia by all international standards but which compares somewhat favourably with the haemoglobin status of our general population.

These children of school going age are very vulnerable to gastrointestinal and upper respiratory tract infections with its subsequent systemic complications. The above along with malnutrition and iron deficiency may very well be contributing to a low IQ level and stunted physical and mental wellbeing of these children as has been demonstrated by a survey of Egyptian rural children carried out in April 1995 which showed considerable difference in IQ level of infected and non-infected children. Mean IQ level of Enterobius vermicularis infected children was statistically lower (t=2.02, p=0.04) than that of their non-infected peers (t=2.42, p=0.02). Infected male children showed significantly lower IQ than infected females (t=2.02, p=0.04) while the non-infected children showed no sex difference. However physical growth and haemoglobin concentration of infected children were not statistically different from those of the non-infected control peers in all age and sex groups4. It is an established fact that intestinal parasitic infestations contribute significantly to poor growth and malnutrition in children5,6. The rate of weight gain in children treated for worm infestation was 8% greater than untreated children7. Studies using height, weight or haemoglobin concentrations as indices to assess the nutritional status of infected and children treated for intestinal parasitism showed significant improvement in the nutritional status of the treated peers thus reiterating the contribution of worm infestation to childhood malnutrition8-10. In view of the WHO recommendations, ‘In areas where prevalence of mild to moderate underweight children is greater than 25% and where parasites are known to be widespread, high priority should be given to deworming programme, data on prevalence of worms and trials of anthelminthic drugs are vital’. In addition to the draining effect on mental and physical well-being they are pathogenic, for instance Ascaris with the highest positivity rate causing abdominal discomfort, biliary diseases, colic, pyogenic cholangitis, acalculous cholecystitis, cholestasis11, diverticulitis12 and necrohemorrhagic pancreatitis13,14, and is responsible for approximately one third of these diseases in endemic areas15. Khuroo MS et al showed ascaris to be responsible for 59 cases of acute pancreatitis out of a total of 256 Ascaris infected cases with an overall mortality rate of 3 percent15.

Ascaris infestation has become an important consideration in hepatopancreato-biliary diseases in endemic areas and requires prompt recognition and treatment to prevent complications16. Worm infestation is not only confined to certain geographical areas of the world but is an emerging problem world wide with increasing number of cases being reported from Europe and the USA17. In stark contrast to earlier studies, Ascaris related clinical disease is not just restricted to patients with a heavy worm load18 but may be seen with a single worm lodged in the biliary tract and negative parasitic tests in the stools11,17. This thus is not an uncommon disease and should be considered in patients presenting with hepato-pancreato-biliary symptoms even from non-endemic areas19. In view of the above findings, it is highly recommended that measures to reduce worm infestation including mass chemotherapy; should deserve high priority because of the known harmful effects of these worms.

We are greatly indebted to Prof. Dr. Khurshid Ahmed Siddiqi who has been a continuous source of inspiration, for his invaluable advice, help and consistent encouragement without which this study would not have been possible. We are grateful to Dr. Ahmed Badar and Dr. Rubina Naheed for their kind help and expertise. Our gratitude to Dr. Imran Farooq, Shams-ul-Arifeen, Manzoor Ahmed, Muhammad Arshad, Sadarat Khan, Zaheer Gul and Waseem Abbasi for their valuable assistance and technical support.

Pamba HO, Bwibo NO, Chunge CN, Estambale BB. A study of the efficacy and safety of albendazole (Zentel) in the treatment of intestinal helmenthiasis in Kenyan children less than 2 years of age. East Afr Med J 1989;66(3):197–202. 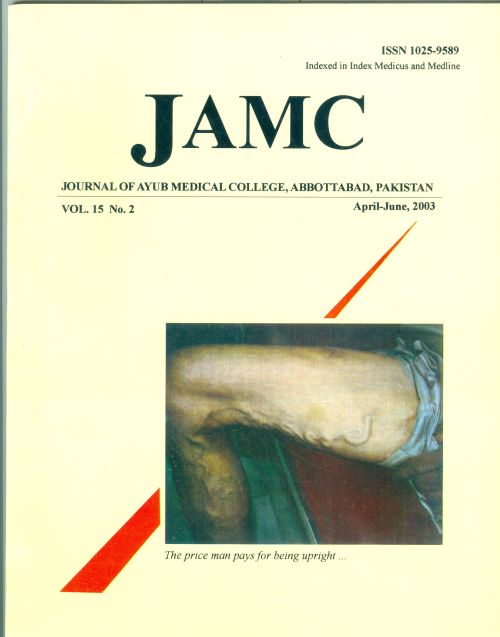